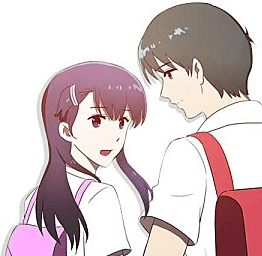 I will be listing my Recommendations down here too. These are some good romance Manga you should definitely try. I assure you won’t regret. 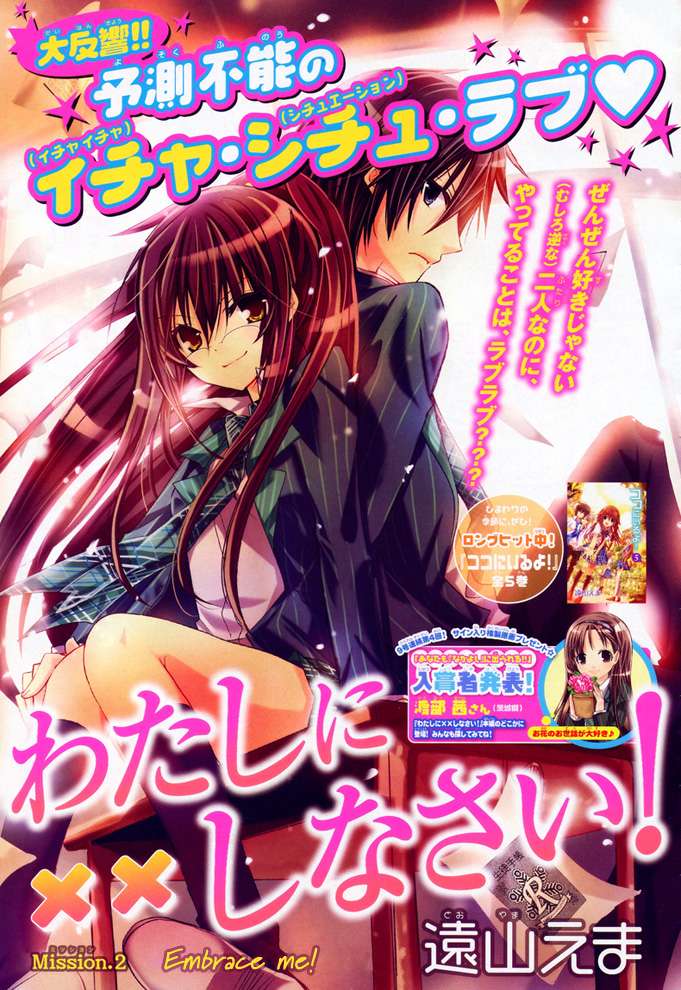 Synopsis: In class, she’s a sort of zoned-out girl, and he’s the year one class’s most perfect, good-looking guy. But the two of them have a secret, and their extraordinary “love experience” will start now! Himuro Yukina, known as the “Absolute Zero Snow-woman” is a cold and observant girl. In addition, she is actually a popular cell phone novelist who goes by the name of Yupina. Sadly, with no other human contact than her cousin, Yukina is unable to express more romance in her novels. Kitami Shigure, your so-called “typical bishounen”, who is really a womanizer, has fallen into Yukina’s trap when she blackmails him, and Shigure ends up doing Yukina’s ”missions of love”. As this continues, will these ”missions” be an opportunity for them to fall in love?

Synopsis: Tsubaki is a girl who loves making her younger sister’s hair pretty every morning, but she doesn’t think that kind of style suits herself! On the day of her High School Opening Ceremony, after she failed to be the top student (who usually makes the ceremony speech), she finds herself sitting next to the actual top student of the 1st year, the worst rude guy ever, Kyouta. Because of his saying bad things to her she purposely cuts his hair. Kyota requests that Tsubaki pay him back “with her body” but Tsubaki pays him back by fixing his hair and making it even shorter! Afterward, Kyota unexpectedly kisses Tsubaki and swears he’ll make her his woman.

Synopsis: Whenever Suiren Shibazeki walks by, heads turn due to her captivatingly cute looks. In elementary school, boys would pay too much attention to her, to the point where she avoided them altogether. In middle school, she attended an all-girls school in the hopes of escaping all the unwanted attention, but she was still smothered by her classmates’ coddling. As a result, Suiren now rarely speaks and maintains an expressionless face.

Advancing to high school, Suiren returns to a co-ed school and is once again the center of attention. The boys refer to her as “Takane no Hana,” flower on a high peak, unreachable and idolized from afar. However, one boy outside her sea of admirers catches her eye—Kouha Kawasumi, a talented karate student who is just as quiet as her. While he may not return her immediate affection, Kouha saves her from a group of boys, jump-starting the heartwarming romance that blossoms between the two soft-spoken youths.

Second-year high school student Seiji Utsumi is hopelessly in love with Shou Iketani, the energetic and scatter-brained tennis club captain in the year above him, but he cannot bring himself to even talk with her. Unable to make any progress, he is perfectly content with just watching from afar—perhaps a bit too literally.

While spying on the tennis club’s morning practice on the first day of a new semester, Seiji is spotted and accused of peeping by Yuki Kurokawa, a club member who ends up in his class. However, when she sees that Seiji has no bad intentions and is serious about Shou, Yuki decides to help him confess his feelings.

As Seiji gets closer to Shou with Yuki’s guidance, he realizes that his simplistic view of love and relationships prevents him from seeing the complexity and darkness under the surface—for both Shou and Yuki. Can he navigate through all the heartbreak and misunderstandings to reach his good ending?

Synopsis: Set in a time when vampires are ubiquitous in society, treated as outcasts and forced to keep their identities hidden—despite having signed a peace treaty two hundred years ago, following which they have satisfied their hunger with merely pig’s blood—Orange Marmalade tells the story of Baek Ma Ri, a young vampire who has faced great difficulty due to her nature. Feared and hated, the girl has been driven away from several neighborhoods and is eager to settle down with her family in their current city. The endless prejudice has left her disillusioned about friendship and love; however, the sweet-scented blood of Jung Jae Min stirs something within her and renders her unable to resist biting into the neck of the charming man. Ma Ri must now cope with her life after this encounter, as her victim begins to fall in love with her.

Synopsis:  Seika High School was an all-boys school, but it has since turned co-ed. Misaki Ayuzawa is the first female student council president of the school, eventually earning the nickname of the “Demon President” due to her mastery of Aikido and imposed iron rule.

However, Misaki harbors an embarrassing secret—she has to work at a maid café to support her family. If anybody from her school was to find out, her reputation would be utterly destroyed. And after Takumi Usui—the most popular boy at school—discovers her secret, that might just happen. Kaichou wa Maid-sama! follows their story as they spend more time together and eventually begin to understand each other’s secrets.

Momoko’s troubles begin when Inui Ranmaru, a popular supermodel and new transfer student at her school discovers her secret! In order to keep him from telling, Momoko is his slave!?

Synopsis: Tomo Aizawa and Junichirou “Jun” Kubota are the tightest bros you’d ever see. They roughhouse and spar, but through thick and thin, they’ve got each other’s back. Yet, there’s just one small problem: Tomo is in love with Jun!

Since she was young, tomboyish Tomo has been just another one of the guys; due to his extreme muscle-brained nature, Jun doesn’t notice any of her advances—not even when she explicitly confesses. To add insult to injury, for the longest time, he didn’t even realize that she was a girl.

Tomo-chan wa Onnanoko! follows the comedic hijinks of Tomo and her friends as she tries to catch Jun’s eye and escape the infamous brozone

Synopsis: Before he died, Teru Kurebayashi’s brother gave her only a cell phone, telling her to contact “Daisy” if she ever needs someone to talk to. Now, even though she lives alone and without relatives, Teru never feels lonely because Daisy is her constant confidant and supporter.

In order to pay off a debt, Teru finds herself needing to work for the rude, inconsiderate, and abusive (not to mention quite handsome) school janitor, Tasuku Kurosaki. While her predicament seems on the opposite spectrum of her relationship with Daisy, maybe Teru’s two different worlds are more closely connected than she thought?

Synopsis: Although admired at school for her amiability and academic prowess, high school student Kyouko Hori has been hiding another side of her. With her parents often away from home due to work, Hori has to look after her younger brother and do the housework, leaving no chance to socialize away from school.

Meanwhile, Izumi Miyamura is seen as a brooding, glasses-wearing otaku. However, in reality, he is a gentle person inept at studying. Furthermore, he has nine piercings hidden behind his long hair and a tattoo along his back and left shoulder.

By sheer chance, Hori and Miyamura cross paths outside of school—neither looking as the other expects. These seemingly polar opposites become friends, sharing with each other a side they have never shown to anyone else.

These are all my favorite romance manga. I personally loved them all.

I recommend these romance manga to anyone whoever ask for my recommendations.

Hope you guys also love it!