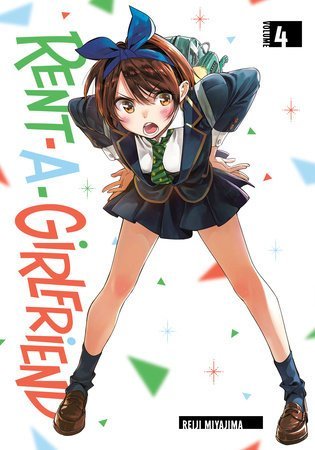 So let’s step into a world where you’re a young college student located in the heart of Japan named Kazuya Kinoshita. You were in a good place. You had fun-loving and loyal friends, a smokin’ hot girlfriend (at least on the surface), and things seemed to be going pretty peachy in life. Here comes another bright day, walking to school with your girlfriend of one month. You take a good look at this angel walking in front of you, sporting an admittedly spot-on sense of fashion, and think about how you’ll spend your loving future with her. She turns around, beautiful face and all, puts her hands together, smiles, and in the sweetest tone, lets you know that she loves someone else and proceeds to throw you under the bus.

Woah. Did she just break up with me?

I’m so depressed. What should I do?

–Well, get this. There’s this app right? And for a nominal fee of only most of your monthly savings, you can rent a perfect girl with an ideal personality that’ll act as your “girlfriend” long enough for you to fill the hole in your heart that once contained your naïve sense of fairy tale love for your now ex-girlfriend.

–The catch? Other than having to pay a hefty sum of money to role-play as a couple with a girl to whom you have no actual connection with? Well, probably nothing, unless this rental girlfriend, Chizuru Mizuhara, happens to be your neighbor, and her grandma and your grandma happen to be close hospital friends, and both of whom happen to be convinced that you two are an actual couple.

Oh my goodness, grandma thinks. My forever-single grandson actually found someone who loves him for the wonderful, but flawed person that I know him as! I’ve already faced a life-threatening collapse in the hospital once, but I have no more regrets, since I, Kazuya’s grandmother, now know about this wonderful and absolutely gorgeous woman for whom I will use every last bit of my willpower to all but guarantee my grandson’s eventual marriage with. I mean, Kazuya wouldn’t lie to me on the hospital bed about his relationship with Chizuru now would he? And he wouldn’t drag her along in all this even if he did, would he? 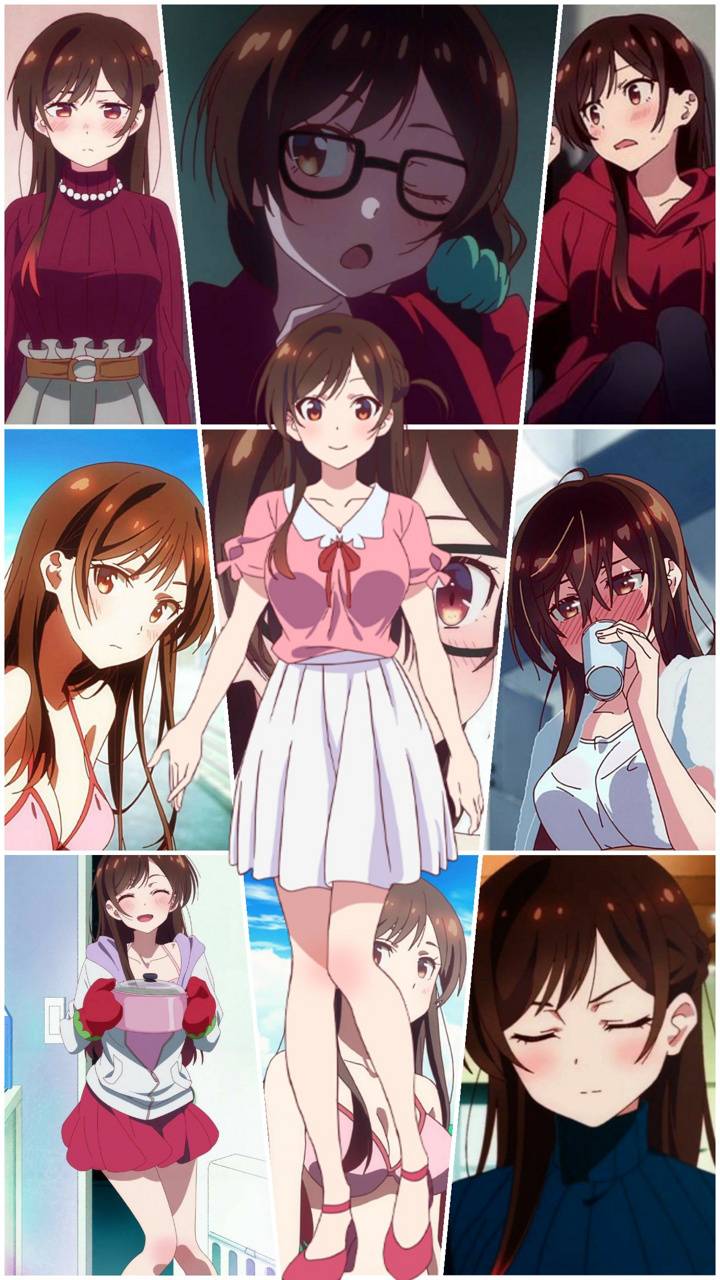 Now this show is an interesting concept. It is essentially a what-if scenario played out through the life of a late adolescent japanese college student that, and although I don’t personally relate to it (because I’m too old for the horny, adolescent life of a japanese college student image that the author is trying to portray), Rent-A-Girlfriend does present a relatable picture of love (and lust) for the late teen Kazuya, who’s truly trying to find that special someone in life, but who lacks just enough of the maturity needed to realize the one important lesson that most people learn at some point in their lives: Not everything is set in stone, and if the person you love turns out to not love you back, then it’s time to grow a pair, and move the f*** on.

The only caveat in this world is that rather than just swallowing your pride and moving on as most do after a breakup, this society presents you a neat little alternative phone app called rent-a-girlfriend™, which should be pretty self-explanatory. New app in hand, Kazuya attempts to mitigate the loss of love with well…love.

The show doesn’t try to appeal to everyone. It is a story about a very specific type of person, at a very specific stage in life, going through a very specific phase of maturation, but who just so happens to find his self-growth and acceptance of his life circumstances through his interactions with the rental/de-facto girlfriend, Chizuru Mizuhara.

In order to keep up appearances with all his friends and family, Kazuya continues renting out the girlfriend and many unfortunate and somewhat-badly handled social scenarios lead to most of the world believing that Kazuya and Chizuru are an actual couple. His best friends egg on their relationship (sometimes even encouraging a deeper form of physical intimacy), the grandmas see their marriage as all but guaranteed, and with all this is happening, how will Kazuya deal with the past when his now jealous ex-girlfriend inevitably joins in on the fun? If this concept interests you, I encourage you to check out the show for yourself, and yes, there will be cringe, but overall, it’s a somewhat understandable type of cringe.

This show does a good job of portraying character personalities with enough complexity that they don’t fall squarely within the trope of tsundere, yandere, kuudere, and other archetypes (in the strictest sense at least) that we see in most anime today. Chizuru is surprisingly tolerant and mature, but has her own vulnerabilities and struggles to come to terms with her growing feelings for Kazuya, despite his mere status as a “client”. Kazuya learns how to grow up from a well-intentioned, somewhat emotionally immature “lovable-loser” teenager, to a more developed and realistic individual, capable of seeing past the fictions created by his desires for intimacy, the need to get back with his ex, and his idea of a perfect, but somewhat idealistic, future. His friends are loyal to a fault, care about his well being, react with anger when they think Kazuya can’t man up to his ideals, and are a good representation of the friends that you would just goof around with in college, but who will always be there for you when the going gets tough. None of these characters play a part solely for the “story” and none of these characters have set roles in the story. They feel like people, changing as people do depending on the circumstances, and that’s the charm of this show in my opinion. If I lived in a world with friends like this, with a rent-a-girlfriend app, and with the life circumstances that Kazuya went through, I can seemyself doing what he does through his shoes, even if that’s not how I actually am in my current life. That’s what makes for good characters. Heck, even his side character friend gets some character development after Kazuya finds out that his friend has a rental girlfriend as well, leading to some very awkward moments that isn’t totally unbelievable given the situation. Oh, did I mention there’s more than one rental girlfriend who also love Kazuya? We definitely can’t have romantic comedy anime without some kind of love quadrangle involved. Overall, the characters are not necessarily “relatable” to everyone, but definitely understandable if one were to imagine themselves going through what the main cast went through in a world that has an app giving you access to girlfriend rental services. 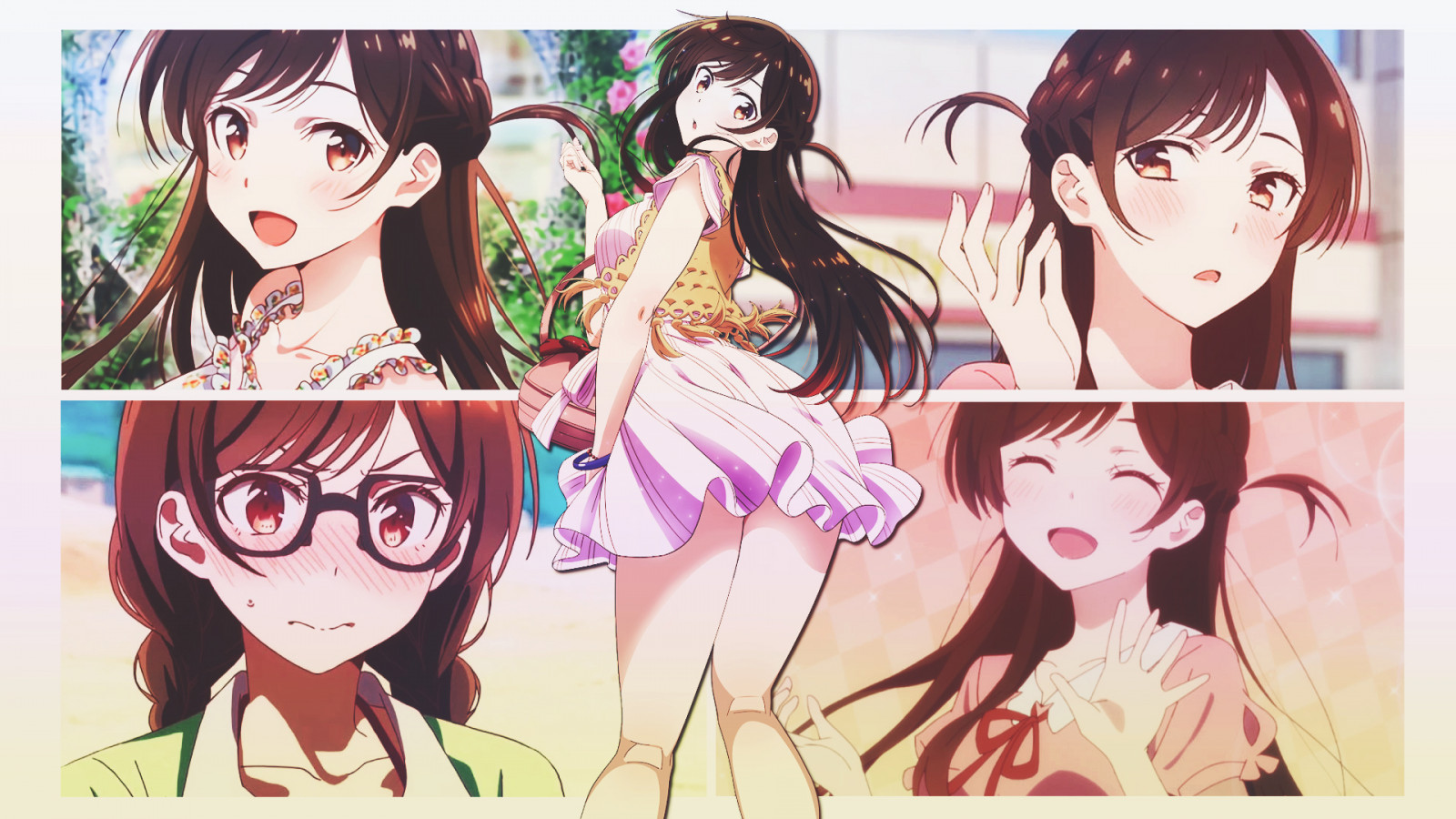 The art of this show utilizes vibrant color schemes, and the varied design touches to the characters that makes it feel as if no one is truly a background character (unless intended). I think this show aims for individuality in characters, and although the facial features are somewhat similar between the characters, the lack of matching colors between any of the main cast, helps all the more in differentiating the different identities, looks, and overall feel of those characters, whether you’re talking about the all-around mature look of Chizuru (sometimes disguised under a nerdy getup), the dainty flowery look of the shy Sumi Sakurasawa, the emboldened look of my favorite short-hair, irregular heartbeat “trial” girlfriend Ruka Sarashina, and everyone’s favorite petty (and yet still so fashionable) ex-girlfriend Mami Nanami. Just compare their eyes, hair color, and color choice for their clothes and tell me what looks the same. Nothing. And that, is at least one effective method of how you make characters stand out.

I don’t typically judge a show when its main focus isn’t about music as a whole (think Naruto, which has memorable music for everything: opening themes, character themes, tragic backstory themes, and memorable themes for “boss” battles). And unfortunately, a decent chunk of anime, such as Rent-A-Girlfriend, uses music that “fits” a scene, technically speaking, but which aren’t intended to “stand-out” as pieces that leave a lasting melodic legacy. Ask someone who’s watched this show once if they can remember Chizuru’s theme, and I guarantee you a good majority of them will struggle to recall. And yet, the moment you ask any Naruto viewer to recall Pain’s theme song to you, they’ll be chanting out that iconic choir melody to you with a clarity comparable only to an FPS gamer’s attempt to recall the Halo theme song. Basically, the music in Rent-A-Girfriend is appropriate, but in my opinion (emphasis on my opinion), it’s nothing too memorable. However, if you enjoy catchy opening themes sung by a female rock band, then I think you’ll have something to look forward to for music when watching this show.

The show is great for what it is, but I’d say it isn’t for everyone. It’s a specific type of romantic comedy that focuses on the love life of individuals going through that early high-school/college-esque love experience, except instead of Tinder or Bumble to fall back on, they have a girlfriend rental app instead. What we end up with is a sweet story of loyalty and devotion trumping all else, although with a tinge more idealism than what I consider “relatable” (for example the “saving someone who fell off a boat and they start falling in love with you” trope), and when you mix that in with some surprisingly grounded characters and the typical harem anime theme, you get an anime that makes for a good seasonal watch. Its not a show trying usurp expectations of a genre like Madoka Magica, or create a breathtaking story of two people bound by destiny like Your Name, but it has a solid place in the archives of romantic comedy anime. Even if you aren’t “relating” to Kazuya in the strictest sense, it’d be hard-pressed to claim that his actions aren’t at least somewhat understandable when trying to picture his life through his eyes. This anime is meant to be a story of young love and growth, operating under a slightly different set of societal rules that aren’t too far off from what we currently experience. For executing that concept as well as it did, and making it an enjoyable ride to boot, I give this show a solid 3.5 out of 5.

When you buy through links on our site, we may earn an affiliate commission.

ThingsfromAnotherWorld has some amazing deals on toys, comics, novels, video games, and many amazing items more.