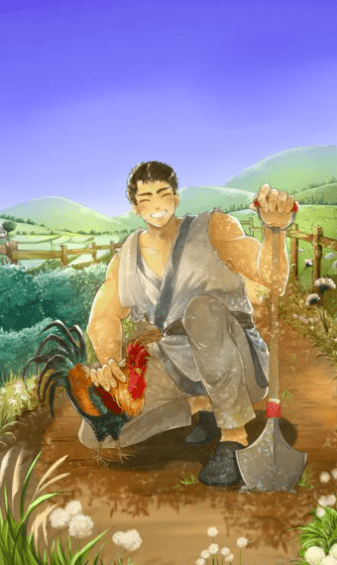 Beware of Chicken is a popular English web novel with a cultivation and farming theme with an overpowered main character. Written by Casualfarmer, this well-written web novel has more than 200 chapters(3 volumes) and is still ongoing.

The web novel follows Jou Rin who finds himself transmigrated into the body of a boy who had just died. Finding himself in the world of cultivation, and knowing the true nature of such a world, the main character decides to leave the sect and start a peaceful life somewhere in a remote place.

Jou Rin leaves the world of cultivation behind and starts his peaceful life as a farmer. He starts to farm the crops and rear animals like chickens, pigs, etc on the farm.

World in Beware of Chicken is a typical cultivation world with powerful sects ruling the world. Rule of the Jungle prevails. Immortals despise mortals for being weak and mortals are afraid of immortals. I like how the author doesn’t just reveal the world but he shows them bit by bit.

In terms of the Story development, the story’s pace is slow. The author takes his time to develop the story. Characters’ interactions are given priority which makes the pace slow but this just feels right. There are few fights in the story. But each time, there’s a fighting moment, we know that the fight is gonna be great. The fights are written in much detail that we can just visualize the fight easily.

Now Let’s discuss what made this story so popular. I believe there are two cores to this story. First, It’s the characters. Whether it’s a chicken that starts to cultivate by looking at the moon, a pig who learns to fight, a rat who is interested in medicines, or a fish who can turn into a dragon, their thoughts and their interactions with each other makes the core of the story.

The author takes his time to develop these animal personalities. It is always a wholesome and humorous moment to know their thoughts. For example, Jou Rin knowing his chicken has developed consciousness is in the dilemma if he should eat the other chickens in the pen. On the other hand, Big D thinks it’s an honor for those chickens to get eaten by his master Jou Rin. It’s just a simple detail but details such as these bring life to this story.

The animals’ interaction with the main character and with each other as they try to figure out the world and their purpose is a golden moment full of humor and wholesomeness.

The next core of this story is growth. It’s not just focused on the animal characters but all of the other characters including the main characters and others are given their moment of growth. CausalFarmer one way or another tries to grow or mature these characters by throwing them in different situations. Even though he is overpowered, the main character is always in a confusing stage about his power and is in the stage of growing up. As he gains the power he loathed initially, he tries his best to avoid the fight or to kill. But he learns the hard way that he needs to use the power to protect his loved ones.

The animals also get to learn that they need to be powerful to protect their heaven, the Fa Ram. For this, they all try to get strong in their own way. Big D, the chicken, goes out to explore the world and learns new things about the world. He makes new friends while exploring.

The story also has a well-written romance and it is sweet. The female characters are also written well. They are not just there to cheer the main character. They have their role and importance in the story. I don’t think there is going to be a harem.

One con of the story may be its pace. Some may find it boring. Sometimes, the author focuses too much time on unimportant details that make the story boring.

In conclusion, Beware of Chicken is a good story with its popularity well deserved. The story mostly focuses on the development of the characters and their interactions are full of humor and heartwarming. The story also contains romance. If you are a fan of a novel with an overpowered main character who farms and with less fighting, then this story is for you.

You can read the story on Amazon or listen to it on Audible.

Thanks for reading. Do comment about your thoughts on the story.

Check out other Novel Reviews: